Writers know it's important to create complex, vivid characters that keep readers engaged. In this post, Kyle A. Massa from ProWritingAid shares how to make your novels' settings equally compelling.

Character. Plot. Setting. Of those three, which do you enjoy writing the most?

For myself (and many writers I know), character or plot usually take the top spot. Setting usually doesn’t. Humans connect with other humans, after all, so it's often easier to invest oneself in characters and their conflicts. A place, though still important, is a bit more difficult to connect with.

We're going to treat our setting like a character. Let's start with the basics. Here are some questions we all ask ourselves when creating characters:

Now that we know our questions, let's answer them for our setting.

Most writers begin with question one, usually using a few sentences to set the scene. It's the most basic aspect of setting and likely the most obvious.

To address this question through the character lens, let's imagine what our setting might look like as a character. Are they young or old, rugged or refined, diminutive or enormous?

Better yet, is there an existing character in your book who personifies your setting?

An excellent example comes from Neil Gaiman's Coraline. The book's main setting is the house behind the door that Coraline discovers. It resembles Coraline's house, only some parts of it are slightly (and creepily) different.

The same goes for the book's antagonist, the Other Mother. She looks like Coraline's real mother, although something isn't quite right (probably the buttons for eyes). Here, Gaiman mirrors his setting in his villain and vice versa.

Like many great characters, the best settings have detailed histories. For example, consider the castle Harrenhal in George R.R. Martin’s A Song of Ice and Fire series. Martin describes the burned towers and vast corridors of the castle, as we expect him to.

Yet he goes a step deeper with backstory. We discover that Harrenhal brings terrible ends to each house that owns it. Many Westerosi claim the place is cursed, and even haunted. That creepy backstory gives Harrenhal added presence. You might be wondering, How can a setting want anything? Well, consider Andy Weir’s The Martian. The principal setting is Mars, and Mars basically wants to kill Mark Watney.

Of course, the planet doesn’t have any sentient will, but that doesn’t stop it from trying to kill him. If you treat the setting as a character and consider what it wants, you add depth.

This one may or may not apply to your setting but it's a potent addition when it works. Consider the secrets hidden within the country house of Bly in Henry James's The Turn of the Screw. A setting with a secret is just as compelling as any secretive character.

Great characters have conflicts, and so do great settings. For instance, take the war-torn city of Osgiliath in J.R.R. Tolkien's The Lord of the Rings. This location provides a visual representation of the greater conflict in the series; what was once a thriving city of humans is now a smoking ruin overrun by orcs.

I'll bet you've heard of show, don't tell. It's a fine rule of thumb though it need not always be followed. For example, it’s often acceptable to describe a character's appearance rather than conveniently have them peer into a mirror. The same goes for describing a setting.

However, some aspects of setting should be suggested rather than stated. Imagine if J.K. Rowling had written this: “The Forbidden Forest was super creepy.” That doesn’t scare anybody! She made it creepy by showing us the centaurs, werewolves, giant spiders, and more that roamed within.

So how can you do the same for your settings? Here are a few tricks. 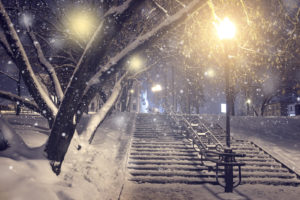 For starters, allow yourself to “tell” in your first draft. Let’s say you’re writing a story set in a small town during winter. In the first draft, you might simply write, “The town was cold.” We forgive you. It’s just a first draft!

In your second draft, return to those blunt descriptions and decide how to show coldness rather than tell it. Describe the ice hanging from the eaves of the houses, the slippery snow packed upon the sidewalks, the breath hissing from your characters’ mouths. You haven’t used the word “cold” anywhere, yet the suggested meaning is clear.

Furthermore, having one character describe another is an effective way to suggest characteristics. This works just as well with settings. A great example comes from one of my favorite books, The Blade Itself by Joe Abercrombie. Here is one character's description of Adua, a thriving city and the novel's chief setting:

“Adua,” murmured Bayaz. “The center of the world. The poets call her the city of white towers. Beautiful, isn't she, from a distance?… Believe me, though, she stinks when you get close.”

Here Bayaz has shown us what Adua's like without the author telling us anything. It's a beautiful city from afar but its beauty conceals a darker, more grisly side.

Finally, show your setting's traits through action. Cormac McCarthy didn't just tell us the world was dangerous in The Road. He showed it by populating that world with ashes, marauders, and cannibals. If your setting is trying to kill your protagonists, it'll feel more like a character.

Developing the Arc of Your Setting

Characters have arcs. So, like characters, great settings often have arcs as well. This might sound like an odd concept at first, but it really can make a difference in your writing. Consider, for example, the Overlook Hotel in Stephen King’s The Shining. At the beginning of the novel, it seems to be an ordinary (albeit creepy) hotel. As the story progresses, we discover that the hotel has its own agenda. By the end of the novel, (spoiler alert!) the Overlook is destroyed by its own unstable boiler.

For a less supernatural example, look to F. Scott Fitzgerald's The Great Gatsby. At the beginning of the novel, Nick Carraway arrives in Long Island to find the prosperous communities of East and West Egg. However, we soon discover the apparent wealth and splendor are only an illusion. By the end of the novel, the seedy truths of East and West Egg are revealed. Nick moves away.

To build your setting's arc, consider what your setting is like at the beginning of the story, what it becomes by the end, and what happens in the middle to make it so.

Maybe you start with an idyllic pastoral country which ends up ravaged by war. Or your post-apocalyptic wasteland might be restored to beauty by the heroics of your protagonist. Or perhaps your setting stays just the way it always was despite what happened in the middle. Whatever arc you choose, it should improve your setting.

Use these tips to make your settings feel like characters. You’ll be amazed by the results!

Do you consider the characteristics of your settings when you're writing? Please leave your thoughts below and join the conversation. Kyle A. Massa is an independent speculative fiction author and a writer for the ProWritingAid Blog. When he’s not writing, he enjoys reading, running, drumming, and playing with his cats. His debut novel, Gerald Barkley Rocks, is available now.