Thomas Hardy's edited manuscript of ‘Tess of the D'Urbevilles' 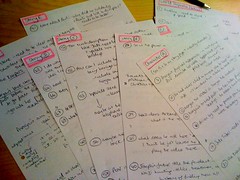