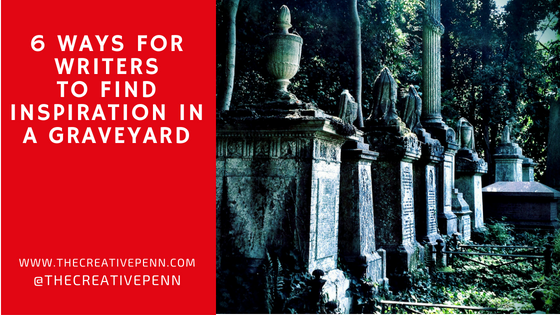 If you listen to my podcast, or you read any of my fiction as J.F.Penn, you'll know that I am a taphophile, otherwise known as someone who loves visiting cemeteries, ossuaries, and graves.

I also self-identify as a ‘vanilla Goth,' as in I don't wear Goth clothes or makeup, but I sure as hell am into death culture!

Today I am thrilled to share this article about graveyards from my slightly-more-Goth author friend, Icy Sedgwick.

Visiting graveyards is not often high on most people’s to-do list. Unless you’re attending a funeral or visiting a lost loved one, there’s not much call to go to one.

Even if you’re not George R. R. Martin, death is a great way to liven up a plot, move your readers, or explore the world of your novel. And where do we find death? In graveyards! That they’re tranquil spots where you can commune with your ideas in peace is a bonus.

I’ll be honest, I’m the kind of person who Googles holiday destinations to see what cemeteries are nearby. I even have a list of Top 5 cemeteries to visit. I can’t think why I don’t get invited to more social events 😉

But cemeteries, churchyards, and other burial sites are amazing places for inspiration. I can see you’re still not convinced, so come with me. We’ll go look around a graveyard and see how they can help your writing.

1. Soak in the human stories around you

Cemeteries aren’t just a collection of dead people. They also collect stories. Each inhabitant had their own life story. Consider the woman lying in a single grave while the rest of her family lies in a family crypt. What happened in that family to cause such a rift? The Crossbones Cemetery in Southwark, London, is a fantastic example of the human side of graveyards. I dare you to visit and not feel moved by the stories of those who lay there.

[Note from Joanna: My novel, Deviance, is inspired by Crossbones graveyard.]

Few headstones tell you how a person died. Often, we’re told they “left this life” or “fell asleep”. You can find exceptions.

A stone in Highgate Cemetery tells the story of a woman who burned to death after her dress caught fire. The cause of death acts as a cautionary tale on the monument. A headstone in Jesmond Old Cemetery notes that the deceased was mauled by a panther.

When you find examples like these, consider these questions:

Much of storytelling involves exploring the answers to questions like these.

Wander up and down the avenues between the graves. Note any stones that catch your eye. Try looking the people up when you get home. Newspaper articles or obituaries on a site like the British Newspaper Archive can provide further background.

2. Use graveyards for character generation

Short of opening a phone book, you’d struggle to find as many names in one place as a cemetery. Better yet, gravestones contain a wealth of names from a range of historical periods.

It doesn’t matter if you’re writing Regency romance or contemporary thrillers. You’re bound to find a name among the stones. If you happen across the tomb of Voodoo Queen Marie Laveau in New Orleans, you’ve got a character right there.

Take a notebook along to a nearby graveyard and note down any of the names that leap out at you.

Charles Dickens came up with ‘Ebenezer Scrooge’ while visiting an Edinburgh graveyard. The name ‘Ebenezer Scroggie’ jumped out at him and the rest, as they say, is history.

Be careful whose name you appropriate. Members of the Scroggie family pointed out the philanthropic nature of their ancestor.

I found a headstone in Jesmond Old Cemetery which listed the name as ‘Elvira’, and her date of death as 14 February. Here, what the headstone didn’t say was more valuable. Why didn’t anyone know her surname? Headstones weren’t (and still aren’t) cheap, so who paid for the headstone – and why? How old was Elvira when she died? Is it significant that she died on Valentine’s Day?

Answering these questions, even with guesses, builds a more interesting character. Knowing who they loved, where they lived, and how they died lets you step into their shoes.

3. Develop architectural styles for your world

If you’re writing a novel set in the here and now, you won’t pay much attention to architecture. You’re bound by the constraints of what exists. But if you’re writing fantasy? The world is your oyster. Not only that, but funereal fashions dictate the architectural styles of the cemetery. You can find Grecian urns alongside Egyptian obelisks and pyramids. Celtic crosses rub up against plinths and angels.

Or can you invent a belief system based on the gravestone symbols? Think about how these symbols could represent ideas within your narrative.

4. Take inspiration for the society of your world

Like architectural styles, political or religious beliefs also rub shoulders. Highgate Cemetery has a section for ‘dissenters’ (i.e., non-Anglican burials). Other cemeteries have a Jewish quarter or a Muslim section.

Take notes on the interaction between these different segments. What do they tell you about the history of the place? Or the history of these people? Visit your local library afterwards to find out more about the area. Even snippets of detail can enrich your story’s world building.

On the Isola di San Michele, Venice’s cemetery island has a separate Orthodox area. Igor Stravinsky and Sergei Diaghilev lie here. This section better resembles cemeteries found in England. But the other tombs, designed like giant chests of drawers, are a strange sight for northern European eyes.

How can you use such social and religious divisions to explore similar divisions in your novel or story?

5. What burial customs appear in your story?

You may never feature a funeral or even death in your story. But knowing how death works within the world you’ve created is still important. It gives a brilliant opportunity for world-building and character development.

Are you writing a contemporary novel set in your hometown? That's okay. It’s still worth considering how your characters respond to death.

Think about these questions. Free write, if you prefer. Or discuss them with writer friends to see what you all come up with.

Death can be a sombre time of pain and loss. But it can also add dimension to your characters and plot. No one needs to die in your books for you to know how this element of your world-building works. And knowing how characters cope with, or react to, death gives you a better understanding of them. Devise a range of plot points or find interesting opportunities for character growth.

The approach your characters take towards death colours their outlook on life. That filters into other encounters and affects how they treat each other. They find their place in the world based on their understanding of death. You can explore this from the comfort of your nearest cemetery.

6. Use funerals to explore your own characters

How characters react to loss can reveal a lot about their nature. An antagonist who mourns the death of his nemesis is a lot more interesting than one who feels nothing. We’ll use Megamind as an example. After the novelty wears off, he realises he’s bored without his nemesis. His battles with Metro Man defined his whole life.

Megamind misses Metro Man so much that he creates a new hero. True, Megamind isn’t a villain in the Hannibal Lecter sense of the word. But his feelings of loss and regret after the demise of Metro Man reveal much about his character.

Yes, death is a sombre time of pain and loss. But you can use it to add dimension to your storytelling through character and plot.

Look at The Sixth Sense. Cole’s attendance at the wake meant that the truth came to light about the dead girl. It changed the whole atmosphere of the wake. It also gave Cole a better understanding of his gift and what he could use it for. This key funeral scene helped kick-start his character development.

Send your protagonist to a funeral. What do they wear? How do they behave? What do they say to other characters? Send your antagonist too and see what happens. You might never use the scene you write in the novel. But your sense of characterisation will be so much stronger.

Whichever form of fiction you write, visiting graveyards can help you explore your world and characters. Your plot may never see a hero visit a cemetery or bury a loved one. But knowing how they would react lets you deepen your understanding of their values and nature.

Cemeteries are an invaluable resource for character generation and world-building. Even sitting among the trees with your notebook, soaking up the peace and quiet, can boost your writing by creating mental space. Be respectful and who knows what you might find?

Do you find inspiration in graveyards? Join the conversation by adding a comment or sharing on social media. Icy Sedgwick is a novelist, copywriter and blogger based in the north of England. She writes Westerns and a dark fantasy series about a necromancer. Her passion is investigating all things occult, weird, folklore or macabre.

When she's not spreading the supernatural joy, she enjoys cameras, coffee, Cumberbatch and cake. You can find her folklore and fiction at IcySedgwick.com.