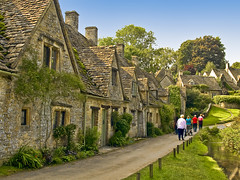 This is a guest post from Elizabeth S. Craig, writing as Riley Adams. Elizabeth writes cozy mysteries, which I just love the idea of! Her latest is Finger Lickin' Dead. You can also listen/watch an interview about writing mysteries with Elizabeth here.

It’s really no surprise that I’m drawn to small town settings. I grew up in a small town in South Carolina (that’s gotten a lot larger in recent years) and have always been interested in the dynamics inside the town. Small towns represent a lot of interesting contradictions. Maybe that’s part of the appeal. They’re not easy to read or label.

Elements that make up small towns (and why they might make a good setting for your novel):

Small towns are deceptively quiet. Of course a small town seems quiet. Go through any small town in the Southern US, for instance, and you’ll see evidence of a slower pace—like folks sitting on their front porches waving at cars going by. But there are many emotions bubbling under the surface. Feelings run deep in a small community because everything seems personal.

These strong emotions lead to ample opportunity for genuine conflict on a very personal level. If you’re setting up real conflict in your novel (one that resonates with readers), a small town might be just the setting you’re looking for. It’s easy to find love triangles, long-standing feuds between families, passionate disagreements, and folks who might be bitter about imagined slights or jealous of the undeserving success of a neighbor. At the same time, there’s a fierce protectiveness among the townspeople and a “we take care of our own” mentality that can lead to insularity…and possible conflict with people from outside the town.

Small towns harbor many secrets. And secrets can make a great addition to novels. Why are there secrets in small towns? Because, if your secret becomes public knowledge, the repercussions are huge and your problem is amplified. Everyone knows your secret. It’s almost like being famous—because everyone knows who you are in a small town. They also know your parents, grandparents, and great-grandparents. Soon they’ll be putting your problems and indiscretions in context with your entire family background: “Why, sure Paul cheated on his wife. Remember his daddy had that fling with Paul’s second grade teacher, Miss Lily? And his grandma ran around on his granddad, too.”

Everyone knows everyone. There’s a comfort in knowing everyone around you, but it’s also a double-edged sword. You get an in-depth relationship with folks in your town, but you don’t often get the experience of meeting anyone new. This can lead to younger residents deciding to move away after they finish school—to meet someone to date, or to have more choice of jobs (and not having your boss be your neighbor…and cousin.) Wanting to move away from a hometown can lead to some inter-generational conflict.

Small towns are friendly to newcomers, but have certain expectations for them. If you move to a small town, you’ll probably be greeted warmly. Neighbors will be happy to give you the scoop on the local schools or where to get the best produce, or who the best barber is. At the same time, there’s a certain expectation of the newcomer—that they toe the line and blend into the fabric of the town. If you’re the kind of newcomer who makes waves by suggesting better ways of running the PTA or the church Christmas play, or the 4th of July parade…then you’re not going to be very popular.

A small town an easy setting for readers to picture and understand. If you throw in “small town” early in your novel, your reader will immediately have a ready-made picture in their heads of a slower-paced, friendly, gossipy, place. You don’t really have to work too hard if that’s what you’re interested in portraying. But if you want to twist it and show how cliquey, insular, and suspicious of change these towns can be, you can take your reader in a different direction.

For murder mystery writers, small towns make for personal motives and a limited number of suspects. The motive for the murder will probably be extremely personal (love, revenge, hate), and your story will feature a limited number of suspects because the town itself won’t be very large. The small town itself might be a little isolated with the nearest town some distance away. This can add an extra dose of tension to your book. If there's a killer knocking out characters in this small community one by one, it can really heighten the urgency of solving the case. The odd juxtaposition of a bucolic setting and a violent death can invoke an urge to get everything back to normal and set things right. Whether the setting is a village in England or a small town in the American South, the reader feels the urge to solve the mystery and return the community to its former idyllic status.

Do you enjoy reading or writing small town settings? What’s the appeal for you? Elizabeth’s latest book, Finger Lickin’ Dead was released June 7th. Elizabeth writes the Memphis Barbeque series for Penguin/Berkley (as Riley Adams), the Southern Quilting mysteries (2012) for Penguin/NAL, and the Myrtle Clover series for Midnight Ink. She blogs daily at Mystery Writing is Murder, which was named by Writer’s Digest as one of the 101 Best Websites for Writers for 2010 and 2011. Writer's Knowledge Base–the Search Engine for Writers  Twitter: @elizabethscraig